Available to rent or buy from Vimeo on Demand. Check out the trailer for more information.

In May 1986 Peter Cushing reflected on his life during an hour-long radio interview that was thought to be lost to the archive, but now, with contributions from:

we can hear his reflections for the first time and get a unique insight into his personality, his work and his lasting contribution to our popular culture.

PETER CUSHING: In His Own Words is a feature documentary based around an extended one-hour radio interview recorded with Peter towards the end of his career. Peter became known to many as the epitome of evil on the silver screen, but his interview reveals a very different character.

Through revisiting the interview, much of which is being heard for the first time, we explore a little more of Peter’s personality, hearing in his own words how he progressed from a fumbling actor on stage at the Connaught Theatre, to the sure-footed international screen actor we see in Star Wars. We hear the warmth of his personality that is often at odds with the many characters that he played, we understand more about his acting technique and get to appreciate why colleagues adored working with him.

Peter is often defined by his work with Hammer Films, but his output was much more extensive. For many he’s as fondly remembered as Dr Who, Sherlock Holmes or Grand Moff Tarkin as he is for playing Baron Frankenstein or Doctor Van Helsing. Our contributors offer a critical appraisal of Peter and his work, reviewing some of his most famous performances.

The documentary’s director, Richard Edwards recorded the interview with Peter a few days after the Royal Premiere for Biggles. During the interview Peter reflects on landing his first acting job at the Connaught Theatre, Worthing and his many subsequent film and television roles. He comments on the mechanical nature of film acting, is optimistic about the future of the film industry and finishes by expressing his love for his late wife Helen, without whom, he concludes, none of it would have been possible.

The audio from Peter’s interview is combined with contemporary footage of the places that were pivotal in his life, including the Connaught Theatre, Worthing, Bray Studios, Oakley Court, Elstree Studios, Hammer House, Baker Street (221b) and Whitstable in Kent, where Peter and Helen made their home in the 1950s.

We’ve made the film with the wonderful assistance of the team at Elstree Studios, a studio that played an important part in Peter’s career. Most of the interviews were recorded at Elstree and range from industry execs to backstage runners, as well as actors who appeared alongside Peter, including: 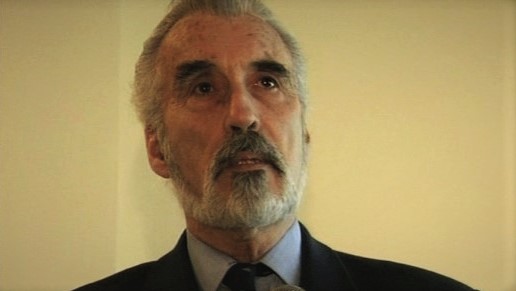 Our narrator is JENNY HANLEY who brings her wealth of experience to help us pull the whole story together and present a single narrative. Jenny’s extensive career spans film, television, radio and theatre. She appeared in Hammer Films’ Scars of Dracula and alongside George Lazenby as James Bond in On Her Majesty’s Secret Service.

Produced and directed by Richard Edwards.