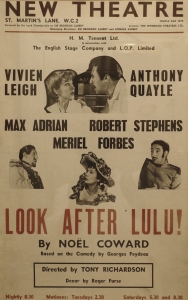 It seemed like the ideal combination, a Noël Coward play, fresh from Broadway, the internationally acclaimed actress, Vivien Leigh and the equally acclaimed British stage actor, Anthony Quayle. But it was not to be.

Noël Coward’s stage farce, Look After Lulu! is based on the French comedy, Occupe-toi d’Amélie by Georges Feydeau. Set in Paris during 1908, the story centres around an attractive young prostitute whose lover takes the curious decision to entrust her to a friend, while he goes into the army. His so-called-friend, soon takes advantage of the situation and attempts to trick her into a mock wedding. END_OF_DOCUMENT_TOKEN_TO_BE_REPLACED