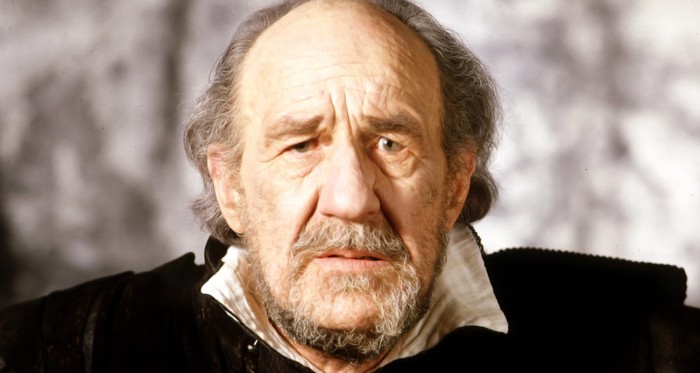 This week’s production diary dips into the archive and dusts off an interview we recorded with one of Britain’s most recognisable character actors, Sir Michael Hordern, who appeared in over 140 films along with countless acclaimed stage appearances in a career that spanned 60 years.

We recorded a wonderful half-hour interview with Sir Michael in his dressing room at the Theatre Royal, Haymarket, where he was appearing George Bernard Shaw’s You Never Can Tell. The production marked his return to the stage after quite an absence. The cast included Harry Burton, Abigail Cruttenden and Michael Denison. Also appearing was Jenny Quayle, daughter of Sir Anthony Quayle, who are both featured in our documentary STAGE DIRECTION.

From Sink the Bismarck to Wind in the Willows, and from Where Eagles Dare to Scrooge, in which he played Jacob Marley to Alistair Sim’s Scrooge, Sir Michael has been a central feature in our homes, on our cinema screen and on the world’s most prestigious stages.

He made his first professional stage appearance in 1937, appearing in his first film two years later in Carol Reed’s A Girl Must Live. He had the makings of a very promising career as an actor when the Second World War broke out, but he immediately enlisted and served on the Royal Navy’s aircraft carrier HMS Illustrious until 1945, rising to the rank of Lieutenant Commander.

Sir Michael established himself as one of the most preeminent actors of his generation, often playing small supporting roles in international feature films, not least of all was opposite Richard Burton in John Le Carre’s The Spy Who Came in from the Cold. He would appear in no less than eight films with Burton, including Alexander the Great, Anne of a Thousand Days and Where Eagles Dare. However, many of his most acclaimed performances were on the stage, with particularly noted Shakespearean roles at the Old Vic and the Shakespeare Memorial Theatre at Stratford.

Some unusual quirks include Sir Michael and Sir Ian McKellen both sharing the same middle name, Murray, and both have played the part of Gandalf in Tolkien’s The Lord of the Rings, Sir Michael on the radio and Sir Ian in the notable trilogy of films directed by Peter Jackson, but it is Sir Michael’s portrayal that is still regarded as the definitive portrayal of the role.

Sir Michael claimed that he was offered the role of Dr Who after William Hartnell, which he turned down. The part eventually went to Patrick Troughton.

Sir Michael Hordern was knighted by the Queen in 1983 for services to the stage. He passed away in 1995 at the age of 83.