We’re really excited to announce the release of our new feature length documentary, PETER CUSHING: In His Own Words, which is now available  to rent on Prime Video – UK and Prime Video – US. In May 1986 Peter Cushing reflected on his life during an hour-long radio interview that was thought to be lost to the archive, but now, along with contributions from friends and former colleagues, we revisit the interview, much of which is being heard for the first time, to provide a unique insight into Peter’s personality, his work and his lasting contribution to our popular culture. 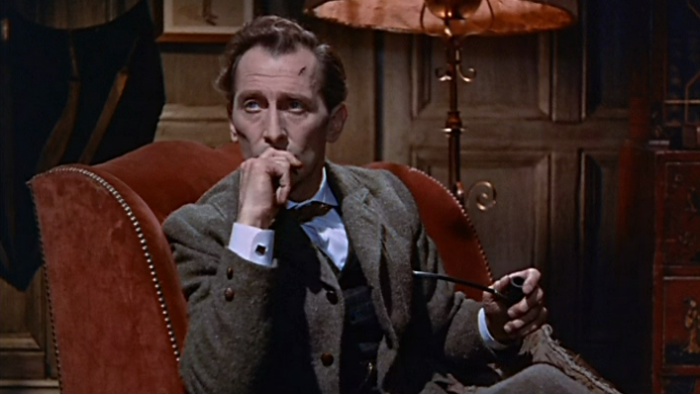 For many, Peter will be remembered for a handful of Hammer horror films, for playing Frankenstein and Van Helsing. But, his body of work is much more extensive and diverse. During his career he made over 100 screen appearances, he was highly regarded as Sherlock Holmes, a part he seemed almost born to play, he was a popular Dr Who on the big-screen and had his place in popular culture firmly cemented by his portrayal of Grand Moff Tarkin in George Lucas’ Star Wars.

PETER CUSHING: In His Own Words is written and directed by Richard Edwards, who recorded the original interview with Peter in 1986, the day after the Royal Premiere for Biggles. For Richard, the documentary is a very personal story. It has allowed him to revisit the afternoon he spent with Peter over 30 years ago and has given him the opportunity to create a unique documentary that takes a fresh look at Peter’s life and work.

He said, “An often used phrase about Peter is that he’s the gentle man of horror, and in many ways that’s true. His personality was certainly very gentle, very caring; very different to the many different characters we saw him play on the big-screen. This is why I wanted to use as much of the original interview as possible to try and give Peter his voice back so that we can hear first-hand how he approached many of his most popular roles. But I also wanted to invite people to take part who’d worked with him and got to know him, so that they could bring their own personal insights and help us understand more about who he was and help us provide a critical appraisal of some of his most significant work.”

PETER CUSHING: In His Own Words includes a wealth of contributions, including rare footage of Christopher Lee and new interviews with Madeline Smith (Vampire Lovers, Live and Let Die), Derek Fowlds (Frankenstein Created Woman, Yes Minister), Valerie Leon (Blood from the Mummy’s Tomb, The Spy who Loved Me) and Judy Matheson (Lust for a Vampire, Twins of Evil) who take us behind the scenes of many of Peter’s most famous productions, while Morris Bright MBE and Paul Welsh MBE help us understand more of Peter’s legacy, and industry insiders The Hammer Runners, Brian Reynolds and Phil Campbell, co-authors of Running Scared, share their experiences of working with Peter on set.

Hammer star and former Bond girl, Jenny Hanley (Scars of Dracula, On Her Majesty’s Secret Service) narrates our story, steering us from Peter’s recollections of landing his first acting job, to his views on acting and his insights into some of his best-known roles, including Baron Frankenstein, Van Helsing, Dr Who, Grand Moff Tarkin, and a role for which he has become synonymous, Sherlock Holmes.

PETER CUSHING: In His Own Words is now available to rent on Prime Video. Click either of the links below to rent it today.