We’ve recently completed filming behind the scenes of Worthing’s Dome Cinema for our short documentary, FILM PROJECTIONS and what an experience it was. Having the opportunity to explore the art-deco main auditorium, the Protectionist’s Bar with its intriguing memorabilia and the amazing projection room, with an original Peerless 35mm film projector sitting next to the latest NEC digital cinema projector, both looking through portals armed with original 1920s acetate fire guards for when the old film stock would combust without warning.

The Dome has been showing films continuously for more than 100 years and is a prominent fixture on the seafront, sitting at the heart of this seaside community. 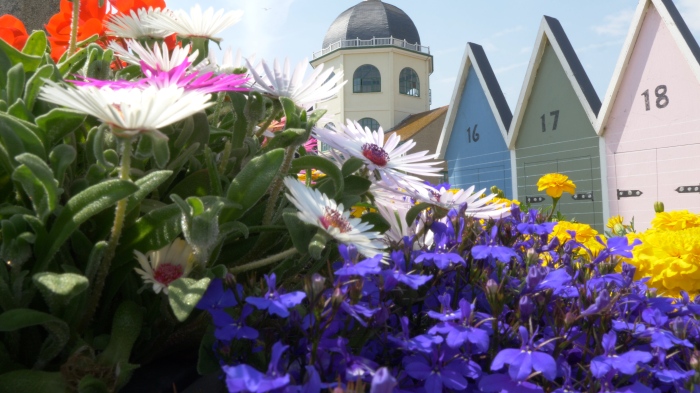 When the Dome was threatened with closure no end of schemes and local groups came forward to try to save it. Not least of all was a proposal by Charlie Chaplin’s son to turn the Dome into an ‘edu-tainment’ centre.

The Dome is rich with original features that hark back to the golden age of cinema when families trooped out whatever the weather, week in week out, to see what happened to be showing that night. The advent of television put many cinemas in jeopardy, many of which were unable to cope with the challenge, but the Dome managed to see off TV and many of the other challenges it faced over the decades, expanding as it went. This year the Dome opened its third screen, a magical 42-seater that helps give audiences more choice.

We have spent a great deal of time at the Dome in recent months and have met most of the staff, a wonderful group of people, film fans to the core and passionately attached to their cinema. The Dome remains now part of the beating heart of Worthing, an essential part of the community that this year had the busiest day in its history, with all three of its screens sold out. The future looks bright for the Dome, and well it should. The dedicated, hardworking team have created a wonderful venue, with a warm welcome. They deserve the success they’ve created.

Now the hard part starts for us. We’re getting down to spending countless days in front of the Avid, busy editing the footage together. We have a great interview with manager, Ross McLaughlin who tells the story of the Dome and how they took on the latest of their challenges, the transition to digital projection. The result will be our short documentary, FILM PROJECTIONS. Look out for our production diary video-blog posts, behind-the-scenes clips and much more. This has been a great project to work on, fingers crossed we can do justice to the Dome and the team.